Start a Wiki
Please see our wiki's policies and guidelines here before contributing!
Welcome to the Magic Knight Rayearth Wiki!

Welcome to the Magic Knight Rayearth Wiki!
Your online source for all information on the manga and anime, Magic Knight Rayearth.
This wiki already contains 2,594 number of edits and a total of 117 articles since its creation on November 20, 2008.
» Please do be aware that UNMARKED SPOILERS lie within! «
Rules & Guidelines • Manual of Style • Articles in Need! • Request for Adminship • Admins 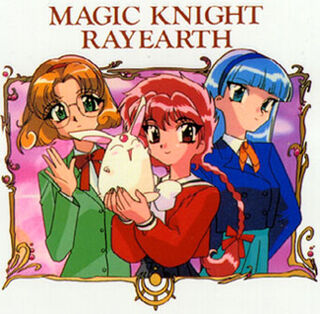 About
151px
"Hikaru Shidou, Umi Ryuuzaki, and Fuu Hououji are strangers brought together by fate when they meet during a seemingly normal field trip to Tokyo Tower. Accompanied by a great flash of light, they hear a mysterious woman's plea to save "Cephiro," and the junior high heroines are suddenly swept away by a giant flying fish. Afterwards, they arrive in an unknown land, where they encounter a man called Master Mage Clef.

Clef informs the girls that they were summoned by Princess Emeraude to fulfill their destinies as Magic Knights, restoring peace and balance in Cephiro. The formerly lively and peaceful land has been in disarray ever since High Priest Zagato imprisoned the princess, who acted as Cephiro's pillar of stability. The Magic Knights reluctantly accept Clef's words as truth and embark on a journey to save Cephiro from the clutches of evil."

Magic Knight Rayearth 「魔法騎士 レイアース」 is a Japanese manga series created by CLAMP, an all-female manga artist team consisting of Satsuki Igarashi, Ageha Ohkawa, Tsubaki Nekoi and Mokona. Appearing as a serial in the manga magazine Nakayoshi from November 1993 to February 1995, the chapters of Magic Knight Rayearth were collected into three bound volumes by Kodansha, and published from July 1994 to March 1995.

Not sure where to start?

Retrieved from "https://magicknightrayearth.fandom.com/wiki/Magic_Knight_Rayearth_Wiki?oldid=5477"
Community content is available under CC-BY-SA unless otherwise noted.