Fuu Hououji is one of the Legendary Magic Knights sent to save Princess Emeraude. She controls the Wind. In the English version of the OVA, she was voiced by Lisa Ortiz.

Personality: Fuu is always smiling, but she is actually quite a strategist. She is calm and polite, but blunt: her comments are often right to the point. She is the brains of the team and often saves them from a lot of trouble. Her power lies within her intelligence; she is accurate and logical. Her time spent in the archery club at school allows her to use the bow and arrow well. Her first weapon is a bow and arrow set. She then moves on to a huge sword of Escudo, which becomes too heavy to lift if anyone besides herself tries to pick it up. Her magical element is Wind.

Bio: In the OVA, Fuu is still the most intelligent of the three, but is not so much 'polite' than on the series. She plays the piano at the musical club, but she will go to another country with her parents. Taking control of Sky God Windam, she is the opponent of Ferio against Cefiro's invasion of Earth.

One of Fuu's largest strengths is her ability to strategize and to think logically. She starts displaying this ability at the start, by not panicking and thinking about what was going on.She has strong morals, but she's also very curious. When the 3 knights find Presea, she doesn't want to just walk into her home, but once inside, looks around with serious interest! *grin* , in the Manga, when the 3 knights meet Ferio, Fuu again shines, as she manages to get his help to reach the escudo without revealing their identities! Plus, the handsome Ferio, falls for this brave young heroine!

Fuu Hououji (鳳凰寺 風Hōōji Fū, Anemone?) has snapping green eyes and short blonde hair (brownish-blonde in the anime) and wears glasses, except when in full armour (Fuu is notably the only Magic Knight whose hair and eyes do not share the same color base). She is more quiet and reserved than the other two members of the group and serves as the voice of reason. Along with specializing in archery, she is also highly intelligent and logical, though this is more akin to book-smarts than street-smarts. Fuu often states the obvious and is very blunt in a fairly humorous way, much to Umi's dismay in some situations. Fuu deeply believes that her belief, along with Hikaru's and Umi's, is her strength in saving Cephiro. She often has moments where she doubts herself, but comes out strong and resolved in the end.

Fuu is in love with Ferio, the estranged brother of Princess Emeraude, who has been helping them since they met in the beginning of the first series. In the second arc, she grows closer to Ferio, and though she is torn knowing she helped kill his sister, his feelings for her never waver. In the second season, Fuu wins an archery contest against Lady Aska, after which they become friends. Fuu is very polite and calls people Sir or Miss (-san in the Japanese version).

Fuu attended a private school for intellectually-gifted children. She was on a school trip to Tokyo Tower when she saw an energetic girl enjoying the scenery through the telescope. This girl is Hikaru Shidou, though Fuu didn't know her. When she saw her running out of money to continue viewing, Fuu approached her and gave her spare tokens to continue the journey. Only moments after she left, she heard a voice calling her out as Magic Knight. In instant, along with Hikaru and another girl named Umi Ryuuzaki, Fuu was transported to Cephiro. Despite everyone else looking panicked, Fuu remained calm and was the one to initiate the three to introduce each other. The girls met the Master Mage Clef shortly after and he told them the plight of Cephiro, starting from Princess Emeraude's imprisonment by High Priest Zagato. The only way for them to go home was to save Cephiro. Fuu decided to just "play along", unlike Hikaru who was more than willing to save Cephiro, or Umi who kept insisting to return back to Earth. Unfortunately, Zagato's minion Alcyone attacked them and the girls had to flee. She gave pursuit, but was eventually driven back by Hikaru's magic.

The girls was soon sent to Legendary Spring of Eterna by Presea to obtain the Legendary Minerals of Escudo. On the way, while traveling inside the Forest of Silence, they met a swordsman named Ferio whom Fuu eventually persuaded into their bodyguards. After this, the outcome differed between the anime and manga.

The girls eventually obtained the mineral of Escudo and brought them back to Presea. In the anime, she's killed by Ascot's monsters while completing the weapons, but in the manga, the attack didn't exist. The girls now journeyed to revive the Rune-Gods. As they journeyed they grew into best friends.

In the anime only, the girls decided to use the box Ferio gave to them. It turned out to be a communicating device to Ferio himself, and while Hikaru and Umi's wishes were deemed to be "stupid and loud" by Ferio, he was stunned with Fuu's wish, who just wanted him to be safe. The girls later met Ferio again, secretly under the contract of Ascot to lure the girls to the desert. Although it looked like he would betray them, he ended up helping them. Unfortunately for him, Ascot caught him red-handed and used him as a hostage to lure the girls again. During the night, Fuu left her friends alone to save Ferio. They ended up helping each other to survive, and eventually after Ferio used himself as a bait to the monster, which was sensitive to sounds, using Hikaru and Umi's wishes recorded in his communicator, and told Fuu to run, she didn't run and resolved to fight. This results her sword to evolve and finished Ascot's monster in one blow. Afterwards, Ferio left again, but he would occasionally help the girls.

While returning to Earth, Fuu acted rather normal, but she still harbored her grief within her heart. Eventually she revisited Tokyo Tower to reunite with Hikaru and Umi. After Hikaru declared that she wanted to return to Cephiro, they were brought there in instant. The exception was that due to the lack of Pillar (Emeraude's position) the world was in crumbling state and three other worlds, Autozam, Chizeta, and Fahren, attempted to take over. The girls must defend Cephiro and look for a new Pillar before Cephiro crumbled.

In these series of events, Fuu helped in defending Cephiro. She also found out that Ferio was actually the little brother of Emeraude, making him Cephiro's Prince.

In the anime, more depth was given. When Hikaru's sword was broken thanks to Nova, Umi and Fuu was left to defend Cephiro on their own. Unfortunately, she was captured by the Fahren faction. In there, she struck a deal with its ruler Lady Aska into an archery match. If she wins, she's about to be freed but if she lost, they can do whatever they like. Fuu ended up winning and told Aska the truth of being the Pillar of Cephiro, which casted doubts on Aska's ambitions. Just then, Ferio busted in to save Fuu. However, her words eventually made Aska cancel her dream to take over Cephiro's Pillar position, knowing that she still love Fahren. Fuu later joined Hikaru and Umi to destroy the individual behind the chaos, Debonair. When they did, they returned to Earth, unable to come back to Cephiro anymore. However, they were satisfied that Cephiro returned to its peaceful state and beautiful form, and it was able to function on their own.

Not much is known about Fuu's parents. However she does have an elder sister named Kuu. Kuu has an obsession with a certain cake sold in Tokyo Tower and always asks Fuu to buy one whenever she visits the Tower.

fuu's older sister, kuu (in anime)
Add a photo to this gallery

In the season 2 of Magic Knight Rayearth, Fuu was very sad when she finds out that Ferio is Emeraude's brother, but he forgives her quickly and their relationship continues to grow.

In the anime after the defeat of Debonair, Fuu and Ferio are forced to separate, However, they never forgot each other.

While in the manga it is revealed that the girls are able to return to Cephiro whenever they want, so Fuu and Ferio were able to stay together.

As a Wind Knight, Fuu's magics revolves around the Wind Element. Her spells include:

Because Fuu is attributed to Wind, her magic is mainly used for defense. Her attributed wind may also be a factoring reason why she has the most spells.

Fuu with bow and arow

Fuu with bow and arrow

Winds of Abmonishment, ep 13 of MKR

Fuu uses her winds of abmonishment, ep 37 of season 2 of MKR

Iyashi no Kaze (Winds of Healing/Healing Wind) in Manga

Windam is Fuu's Rune God. Fuu was the second to revive her Rune-God, Windam. The events differ greatly between the anime and manga. 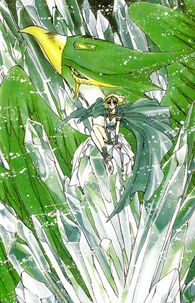 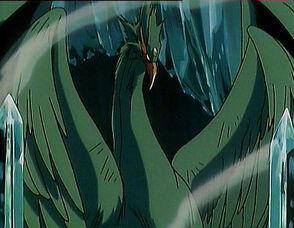 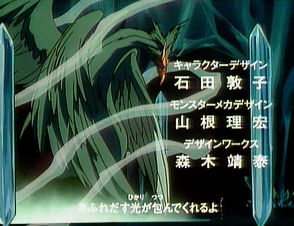 Add a photo to this gallery

In the anime, Rayearth , Fuu Hooji is voiced in Japanese by Hiroko Kasahara , in English from Ruby Marlowe , in Italian by Daniela Favatelevision edition and Emanuela Pacotto VHS edition in French by Claire Tefnin in Spanish by Marcela Bordes and in Portuguese by Fátima Noya

Retrieved from "https://magicknightrayearth.fandom.com/wiki/Fuu_Hououji?oldid=4058"
Community content is available under CC-BY-SA unless otherwise noted.